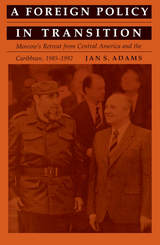 During his years of leadership in the Soviet Union, Mikhail Gorbachev initiated revolutionary changes in that country's foreign and domestic policies. A Foreign Policy in Transition charts the changing Soviet policies toward Central America and the Caribbean during the Gorbachev years, examines the effects of these policies on individual countries, and looks to the role that Russia and the other Soviet-successor states will play in this region in the 1990s.
Jan S. Adams analyzes the factors shaping Gorbachev's foreign policy in Central America by surveying Soviet political views old and new, by describing Gorbachev's bold restructuring of the Soviet foreign policy establishment, and by assessing the implications of his policy of perestroika. A series of country studies demonstrates how changes in Soviet policies and domestic and economic circumstances contributed to significant shifts in the internal conditions and external relations of the Central American and Caribbean nations. Adams discusses in detail such topics as the reduction of Soviet military and economic aid to the region and pressures exerted by Moscow on client states to effect the settlement of regional conflicts by political rather than military means.
The author concludes by speculating about which trends in foreign policy by Russia and other Soviet-successor states toward Central America and the Caribbean may persist in the post-Soviet period, discussing as the implications of these changes for future U.S. policy in the region.
AUTHOR BIOGRAPHY

REVIEWS
"The overall question of Soviet policy in the Caribbean basin and Central America is one to which relatively little attention has been devoted in the past. Adams presents a comprehensive picture of that policy with primary emphasis on changes that have occurred in recent years. [It is] the most current and comprehensive presentation of the subject available."—Roger E. Kanet, University of Illinois at Urbana-Champaign