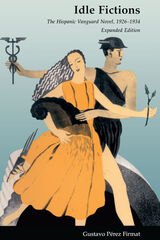 The "idle fictions" of the vanguard novel of the 1920s and 1930s in Spain and Spanish America represented a kind of interlude of playfulness--a vacation or parenthetical insertion--in what was perceived as the established course of the modern Hispanic novel's development. Yet, as Pérez Firmat argues, though this genre saw itself as recreative and interstitial, it deliberately precipitated "a class war not between social classes but between literary classes." Concentrating on source material not widely available, Pérez Firmat reconstructs the reception these novels received at the time of their publication, then develops a reading of them based on the intellectual context of this reception. A new preface and an appendix on vanguard biographies have been added to this paperback edition.
AUTHOR BIOGRAPHY

Gustavo Pérez Firmat is Professor of Spanish in the Department of Romance Studies and Professor in the Program in Literature, Duke University. He is the author of numerous books.

REVIEWS
&quot;P&eacute;rez Firmat provides rich insight into the esthetic values and the artistic tensions that prevailed in the '20s and '30s (not only in the Hispanic world). His is a book of consummate originality that bears the imprint of a critic as strong-minded as he is perceptive. It is certainly a work of enviable maturity.&quot;&mdash;John W. Kronik, Cornell University