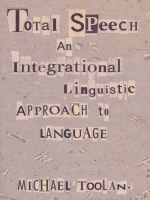 Units, rules, codes, systems: this is how most linguists study language. Integrationalists such as Michael Toolan, however, focus instead on how language functions in seamless tandem with the rest of human activity. In Total Speech, Toolan provides a clear and comprehensive account of integrationalism, a major new theory of language that declines to accept that text and context, language and world, are distinct and stable categories. At the same time, Toolan extends the integrationalist argument and calls for a radical change in contemporary theorizing about language and communication.
In every foundational area of linguistics—from literal meaning and metaphor to the nature of repetition to the status of linguistic rules—Toolan advances fascinating and provocative criticisms of received linguistic assumptions. Drawing inspiration from the writings of language theorist Roy Harris, Toolan brings the integrationalist perspective to bear on legal cases, the reception of Salman Rushdie, poetry, and the language of children. Toolan demonstrates that the embeddedness of language and the situation-sensitive mutability of meaning reveal language as a tool for re-fashioning and renewal.
Total Speech breaks free of standard linguistics’ fascinated attraction with “cognitive blueprints” and quasi-algorithmic processing to characterize language anew. Toolan’s reflections on the essence of language, including his important discussion of intention, have strong implications for students and scholars of discourse analysis, literature, the law, anthropology, philosophy of language, communication theory, and cognitive science, as well as linguistics.

Michael Toolan is Associate Professor of English at the University of Washington.

REVIEWS
“Total Speech provides an entirely original discussion of some of the most central and controversial issues in the theory and philosophy of language. This book is not just a synopsis of the integrationalist school of thought, it is a major contribution to the development of that thought and to its emergence as a major force in American and European thinking about language.”—Talbot Taylor, College of William and Mary

1. On Inscribed or Literal Meaning 24

3. Intentionality and Coming into Language 98

4. Further Principles of Integrational Linguistics, or, On Not Losing Sight of the Language User 140

5. Relevance in Theory and Practice 181