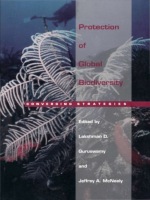 The rate of extinction of biological species is greater today than at any time in the last 65 million years. Some predict that if this rate continues, two-thirds of all living species will disappear during the next century. Because reaching consensus on specific courses of action involves complex issues, any adequate response to this impending crisis must include coverage of many areas of inquiry and understanding. Protection of Global Biodiversity features essays by distinguished international experts who communicate with each other across disciplinary boundaries to address the challenge of formulating policies to protect biodiversity.
Although the global community has recently adopted a Convention of Biological Diversity, the agreement sets forth only abstract goals. Contributors to this volume advance the Convention’s initial steps by providing workable solutions that can be implemented regionally, nationally, and locally. The contributors—including natural, social, and political scientists; economists; lawyers; and environmentalists; and decisionmakers in business, agriculture, and government—have united to create a common discourse and to evaluate and propose strategies for halting this alarming loss of biodiversity. In recognizing the diverse aspects of this task—scientific, economic, institutional, moral, and legal—this book presents a new picture of emerging action.

Lakshman D. Guruswamy is Professor of Law at the University of Tulsa and Director of the National Energy-Environmental Law and Policy Institute.

Jeffrey A. McNeely is the Chief Scientist of the World Conservation Union (IUCN).

REVIEWS
“Many passionate, inspiring appeals to ‘save’ the environment offer no clue as to how it should be accomplished. This book, therefore, is a significant contribution to understanding the magnitude of the problem and the obstacles to its solution.”—Lynton Keith Caldwell, Indiana University


&ldquo;This book covers an enormous span of issues and disciplinary perspectives. Especially welcome is the authors&rsquo; efforts to address the moral and ethical aspects of this important topic.&rdquo;&mdash;Walter A. Rosenbaum, University of Florida


&ldquo;This collection covers an impressive range of &mdash;a great deal of information not readily available is finally concentrated in one place. And it is presented by an unusual and successful mix of practitioners and theorists, policymakers and academics, natural scientists and humanities scholars.&rdquo;&mdash;Benedict Kingsbury, Duke University School of Law

I. Identifying the Problem: An Overview

Biological Extinction: Its Scope and Meaning for Us / Peter H. Raven and Jeffrey A. McNeely 13

Biodiversity and Public Policy: The Middle of the Road / Ariel E. Lugo 33

Biotechnology Can Help Reduce the Loss of Biodiversity / Robert B. Horsch and Robert T. Fraley 49

Agricultural Industrialization and the Loss of Biodiversity / Laura L. Jackson 66

The Mayagna Indigenous Community of Nicaragua: Moving from Conflict to a Convergence of Interests / S. James Anaya and S. Todd Crider 202

On the Uses of Biodiversity / Mark Sagoff 265

What to Do About Biodiversity: The Earth's Biological Riches in Law and Economics / Christopher D. Stone 287

The Convention of Biological Diversity: A Polemic / Lakshman D. Guruswamy 351

Conclusion: How to Save the Biodiversity of Planet Earth / Jeffrey A. McNeely and Lakshman D. Guruswamy 376