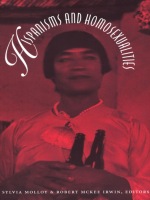 A man masquerading as a lesbian in Spain’s Golden Age fiction. A hermaphrodite’s encounters with the Spanish Inquisition. Debates about virility in the national literature of postrevolutionary Mexico. The work of contemporary artists Reinaldo Arenas, Severo Sarduy, and María Luisa Bemberg. The public persona of Pedro Zamora, former star of MTV’s The Real World. Despite an enduring queer presence in Hispanic literatures and cultures, most scholars have avoided the specter of sexual dissidence in the Spanish-speaking world.
In Hispanisms and Homosexualities, editors Sylvia Molloy and Robert Irwin bring together a group of essays that advance Hispanic studies and gay and lesbian studies by calling into question what is meant by the words Hispanic and homosexual. The fourteen contributors to this volume not only offer queer readings of Spanish and Latin American texts and performances, they also undermine a univocal sense of homosexual identities and practices. Taking on formations of national identity and sexuality; the politics of visibility and outing; the intersections of race, sexuality, and imperial discourse; the status of transvestism and posing; and a postmodern aesthetic of camp and kitsch, these essays from both established and emerging scholars provide a more complex and nuanced view of related issues involving nationality, ethnicity, and sexuality in the Hispanic world.
Hispanisms and Homosexualities offers the most sophisticated critical and theoretical work to date in Hispanic and queer studies. It will be an essential text for all those engaged with the complexities of ethnic, cultural, and sexual subjectivities.

Sylvia Molloy is the Albert Schweitzer Professor of Humanities at New York University. She is the author of numerous books including Signs of Borges, also published by Duke University Press.

Robert Irwin is Assistant Professor of Spanish at Tulane University.

REVIEWS
“Hispanisms and Homosexualities makes a lasting contribution to the fields of Spanish and Latin American literary studies as well as to lesbian and gay studies. Original and provocative, it provides an impressive display of the new scholarship in these areas.”—David Román, University of Southern California


&ldquo;By problematizing both &lsquo;hispanisms&rsquo; and &lsquo;homosexualities,&rsquo; this collection goes beyond the mere application of queer theory to Hispanic studies; it offers a series of meditations out of which both fields emerge enriched.&rdquo;&mdash;Arnaldo Cruz-Malav&eacute;, Fordham University

I. Gender at Loss

The Legend of Jorge Cuesta: The Perils of Alchemy and The Paranoia of Gender / Robert McKee Irwin 29

The Swishing of Gender: Homographetic Marks in Lazarillo de Tormes / B. Sifuentes Jáuregui 123

The Poetics of Posing / Sylvia Molloy 141

Pedro Zamora's Real World of Counterpublicity: Performing an Ethics of the Self / José Esteban Muñoz 175

Virgilio Peñera: On the Weight of the Insular Flesh / José Quiroga 269