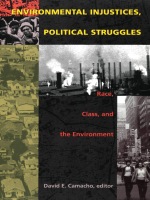 In the United States, few issues are more socially divisive than the location of hazardous waste facilities and other environmentally harmful enterprises. Do the negative impacts of such polluters fall disproportionately on African Americans, Hispanics, Native Americans, and Asian Americans? Environmental Injustices, Political Struggles discusses how political, economic, social, and cultural factors contribute to local government officials’ consistent location of hazardous and toxic waste facilities in low-income neighborhoods and how, as a result, low-income groups suffer disproportionately from the regressive impacts of environmental policy.
David E. Camacho’s collection of essays examines the value-laden choices behind the public policy that determines placement of commercial environmental hazards, points to the underrepresentation of people of color in the policymaking process, and discusses the lack of public advocates representing low-income neighborhoods and communities. This book combines empirical evidence and case studies—from the failure to provide basic services to the “colonias” in El Paso County, Texas, to the race for water in Nevada—and covers in great detail the environmental dangers posed to minority communities, including the largely unexamined communities of Native Americans. The contributors call for cooperation between national environmental interest groups and local grassroots activism, more effective incentives and disincentives for polluters, and the adoption by policymakers of an alternative, rather than privileged, perspective that is more sensitive to the causes and consequences of environmental inequities.
Environmental Injustices, Political Struggles is a unique collection for those interested in the environment, public policy, and civil rights as well as for students and scholars of political science, race and ethnicity, and urban and regional planning.

REVIEWS
&ldquo;Environmental equity is an important emerging issue in environmentalism, one of growing political significance. With original material on the West and Native American communities on which not very much has been written this valuable collection will attract considerable attention from scholars and policy practitioners alike.&rdquo;&mdash;Walter Rosenbaum, University of Florida


&ldquo;This book deals with a major policy dilemma that we have only recently admitted exists and focuses on a salient issue that involves not only our physical environment, but basic issues of fairness and justice.&rdquo;&mdash;Daniel McCool, University of Utah

I. A Framework for Analysis 9