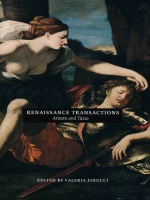 The controversy generated in Italy by the writings of Ludovico Ariosto and Torquato Tasso during the sixteenth century was the first historically important debate on what constitutes modern literature. Applying current critical theories and tools, the essays in Renaissance Transactions reexamine these two provocative poet-thinkers, the debate they inspired, and the reasons why that debate remains relevant today.
Resituating these writers’ works in the context of the Renaissance while also offering appraisals of their uncanny “postmodernity,” the contributors to this volume focus primarily on Ariosto’s Orlando furioso and Tasso’s Gerusalemme liberata. Essays center on questions of national and religious identity, performative representation, and the theatricality of literature. They also address subjects regarding genre and gender, social and legal anthropology, and reactionary versus revolutionary writing. Finally, they advance the historically significant debate about what constitutes modern literature by revisiting with new perspective questions first asked centuries ago: Did Ariosto invent a truly national, and uniquely Italian, literary genre—the chivalric romance? Or did Tasso alone, by equaling the epic standards of Homer and Virgil, make it possible for a literature written in Italian to attain the status of its classical Greek and Latin antecedents?
Arguing that Ariosto and Tasso are still central to the debate on what constitutes modern narrative, this collection will be invaluable to scholars of Italian literature, literary history, critical theory, and the Renaissance.

Valeria Finucci is Associate Professor of Italian at Duke University. She is the author of The Lady Vanishes: Subjectivity and Representation in Castiglione and Ariosto and the coeditor of Desire in the Renaissance: Psychoanalysis and Literature.

REVIEWS
“Most of the leading and well-known scholars of the Italian Renaissance are represented here with their sundry and complementary viewpoints. . . . The presence of so many different critical voices conveys a sense of this volume as a summa of current Renaissance criticism.”—Giuseppe Mazzotta, Yale University

The Grafting of Virgilian Epic in Orlando furioso / Daniel Javitch

Tasso's Armida and the Victory of Romance / Jo Ann Cavallo

II. The Politics of Dissimulation

The Masquerade of Masculinity: Astolfo and Jocondo in Orlando furioso, Canto 28 / Valeria Finucci

Writing beyond the Querelle: Gender and History in Orlando furioso / Constance Jordan