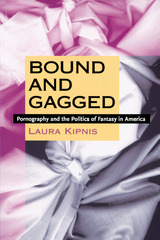 Laura Kipnis is Professor of Radio-TV-Film at Northwestern University. She has received fellowships from the Guggenheim Foundation, the Rockefeller Foundation, and the National Endowment for the Arts for filmmaking and media criticism. She is the author of Ecstasy Unlimited: On Sex, Capital, Gender, and Aesthetics.

REVIEWS
“Bound and Gagged will prove intellectually productive for generations of scholars and thinkers. As always, Kipnis's insistence on articulating concerns of class and gender makes her work vitually unique withing U.S. cultural studies—and she is doubtless among the most engaging writers in the academy today.”—Lauren Berlant, author of The Queen of America Goes to Washington City


“A tour de force polemic in defense of the foibles of human fantasy.”—Linda Williams, author of Hard Core: Power, Pleasure, and the ‘Frenzy of the Visible’


“In Bound and Gagged, Laura Kipnis demonstrates that she is the Marx and Freud of porn.”—Constance Penley, author of NASA/Trek: Popular Science and Sex in America


“Laura Kipnis’s Bound and Gagged is a singularly important contribution to contemporary cultural criticism. [It] should be required reading.”—Michael Bérubé, author of Public Access: Literary Theory and American Cultural Politics

“. . . as clear a take as one could expect on the intertwining of sexual fantasy and reality. . . . rendered in language that generates a seductiveness of its own.”—Robert Christgau, [unidentified review]

“A wonderfully insightful book about the elitism that lurks behind antiporn sentiment. By bringing class into the picture, Bound and Gagged moves beyond the predictable, repetitive argument among feminists. . .”—Leora Tanenbaum, The Nation

“Bound and Gagged is a remarkably rational book about a subject that usually sparks remarkably irrational responses.”—Joy Press, The Boston Globe

“A wonderfully provocative examination of pornographic fantasies and their broader cultural meanings. . . . Bound and Gagged pokes and prods at a number of America’s most tender spots—examining everything from transvestite personal ads and ‘fat fetishism’ to the class-ridden politics of disgust.” —David Futrelle, the Los Angeles Reader

[Kipnis] is a lively and engaging writer who argues. . . that we would be better off simply thinking of pornography as just another form of science fiction.”—Publishers Weekly

Three: Life in the Fat Lane

Five: How to Look at Pornography