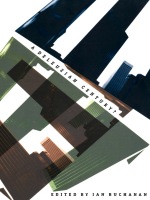 Michel Foucault’s suggestion that this century would become known as “Deleuzian” was considered by Gilles Deleuze himself to be a joke “meant to make people who like us laugh, and make everyone else livid.” Whether serious or not, Foucault’s prediction has had enough of an impact to raise concern about the potential “deification” of this enormously influential French philosopher. Seeking to counter such tendencies toward hagiography—not unknown, particularly since Deleuze’s death—Ian Buchanan has assembled a collection of essays that constitute a critical and focused engagement with Deleuze and his work.
Originally published as a special issue of South Atlantic Quarterly (Summer 1997), this volume includes essays from some of the most prominent American, Australian, British, and French scholars and translators of Deleuze’s writing. These essays, ranging from film, television, art, and literature to philosophy, psychoanalysis, geology, and cultural studies, reflect the broad interests of Deleuze himself. Providing both an introduction and critique of Deleuze, this volume will engage those readers interested in literary and cultural theory, philosophy, and the future of those areas of study in which Deleuze worked.

Ian Buchanan is Assistant Professor of English at the University of Tasmania.

REVIEWS
“Here’s a remedy for resisting the anti-philosophy brigade. . . . [The contributors] energetically claim Deleuze’s importance for issues that have pressed us both politically and philosophically.”—Nina Zimnik, Film-Philosophy

Deleuze and Materialism: One or Several Matters? / John Mullarkey 59

Immanence and Transcendence in the Genesis of Form / Manuel DeLanda 119

Deleuze and the Three Powers of Literature and Philosophy: To Demystify, to Experiment, to Create / André Pierre Colombat 199

From Multiplicities to Folds: On Style and Form in Deleuze / Tom Conley 249