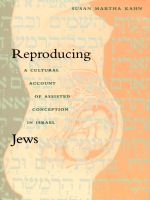 There are more fertility clinics per capita in Israel than in any other country in the world and Israel has the world's highest per capita rate of in-vitro fertilization procedures. Fertility treatments are fully subsidized by Israeli national health insurance and are available to all Israelis, regardless of religion or marital status. These phenomena are not the result of unusually high rates of infertility in Israel but reflect the centrality of reproduction in Judaism and Jewish culture.

In this ethnographic study of the new reproductive technologies in Israel, Susan Martha Kahn explores the cultural meanings and contemporary rabbinic responses to artificial insemination, in-vitro fertilization, egg donation, and surrogacy. Kahn draws on fieldwork with unmarried Israeli women who are using state-subsidized artificial insemination to get pregnant and on participant-observation in Israeli fertility clinics. Through close readings of traditional Jewish texts and careful analysis of Israeli public discourse, she explains how the Israeli embrace of new reproductive technologies has made Jewish beliefs about kinship startlingly literal. Kahn also reveals how a wide range of contemporary Israelis are using new reproductive technologies to realize their reproductive futures, from ultraorthodox infertile married couples to secular unmarried women.

As the first scholarly account of assisted conception in Israel, this multisited ethnography will contribute to current anthropological debates on kinship studies. It will also interest those involved with Jewish studies.

REVIEWS
“This is a deeply compelling and timely book situating Israeli debates about the use of reproductive technology within the context of kinship theory.”—Sarah Franklin, author of Embodied Progress: A Cultural Account of Assisted Conception


"Susan Kahn has given us a first class example of how contemporary ethnography can illuminate the cultural dimensions of the brave new world of new reproductive technologies. Reproducing Jews offers a very different way of conceiving of the relationship between technological change and social life. Sophisticated and well-written, it will be welcomed not only by scholars in a number of fields—anthropology, sociology, feminist studies, Jewish studies, medical anthropology, bioethics—but by those who are curious as to how science, religion, and the desire for children intersect within a particular context."—Faye Ginsburg, New York University

1 "The time arrived but the father didn't": A New Continuum of Israeli Conception 9

2 Not Mamzers: The Legislation of Reproduction and the "Issue" of Unmarried Women 64

4 Eggs and Wombs: The Origins of jewishness 112

5 Multiple Mothers: Surrogacy and the Location of Maternity 140

Conclusion: Reproducing Jews and Beyond 172