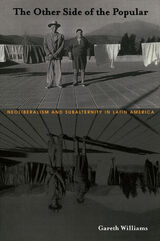 Drawing on deconstruction, postcolonial theory, cultural studies, and subaltern studies, The Other Side of the Popular is as much a reflection on the limitations and possibilities for thinking about the politics of Latin American culture as it is a study of the culture itself. Gareth Williams pays particular attention to the close relationship between complex cultural shifts and the development of the neoliberal nation-state. The modern Latin American nation, he argues, was built upon the idea of "the people," a citizenry with common interests transcending demographic and cultural differences. As nations have weakened in relation to the global economy, this moment—of the popular as the basis of nation-building—has passed, causing seismic shifts in the relationships between governments and cultural formations. Williams asserts that these changed relationships necessitate the rethinking of fundamental concepts such as "the popular" and "the nation." He maintains that the perspective of subalternity is vital to this theoretical project because it demands the reimagining of the connections between critical reason and its objects of analysis.

Williams develops his argument through studies of events highlighting Latin America’s uneasy, and often violent, transition to late capitalism over the past thirty years. He looks at the Chiapas rebellion in Mexico, genocide in El Salvador, the Sendero in Peru, Chile’s and Argentina’s transitions to democratic governments, and Latin Americans’ migration northward. Williams also reads film, photography, and literary works, including Ricardo Piglia’s The Absent City and the statements of a young Salvadoran woman, the daughter of ex-guerrilleros, living in South Central Los Angeles.

Gareth Williams is Assistant Professor of Spanish at Wesleyan University.

REVIEWS
“A serious study on the cultural challenges brought about by postmodern culture in Latin America is in order and largely overdue. In that sense, The Other Side of the Popular makes an invaluable contribution to the challenge of thinking about the present configuration of culture in the region. This book fills a gap in the area of Latin American cultural studies and it does so with serious scholarship, brilliance, and intellectual commitment.”—Horacio Legras, Georgetown University


&ldquo;Gareth Williams does an excellent job of explaining the historical and political changes that brought about the transformation of the popular into civil society, noting that the latter is of a piece with neoliberalism. He demonstrates how to take the subaltern (defined as that which resists assimilation into projects for governability) into account without transforming it into a minoritized subject to be managed nor into a citizenry that gains its sovereignty through consumption.&rdquo;&mdash;George Yudice, New York University

1. The State of Things Passed: Transculturation as National-Popular Master Language

2. Intellectual Populism and the Geopolitical Structure of Knowledge


3. Formalities of Consumption and Citizenship in the Age of Cultural Hybridity

5. The Dispersal of the Nation and the Neoliberal Habitus: Tracing Insurrection from Central America to South Central Los Angeles

7. Operational Whitewash and the Negative Community