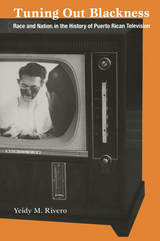 Tuning Out Blackness fills a glaring omission in U.S. and Latin American television studies by looking at the history of Puerto Rican television. In exploring the political and cultural dynamics that have shaped racial representations in Puerto Rico’s commercial media from the late 1940s to the 1990s, Yeidy M. Rivero advances critical discussions about race, ethnicity, and the media. She shows that televisual representations of race have belied the racial egalitarianism that allegedly pervades Puerto Rico’s national culture. White performers in blackface have often portrayed “blackness” in local television productions, while black actors have been largely excluded.

Drawing on interviews, participant observation, archival research, and textual analysis, Rivero considers representations of race in Puerto Rico, taking into account how they are intertwined with the island’s status as a U.S. commonwealth, its national culture, its relationship with Cuba before the Cuban Revolution in 1959, and the massive influx of Cuban migrants after 1960. She focuses on locally produced radio and television shows, particular television events, and characters that became popular media icons—from the performer Ramón Rivero’s use of blackface and “black” voice in the 1940s and 1950s, to the battle between black actors and television industry officials over racism in the 1970s, to the creation, in the 1990s, of the first Puerto Rican situation comedy featuring a black family. As the twentieth century drew to a close, multinational corporations had purchased all Puerto Rican stations and threatened to wipe out locally produced programs. Tuning Out Blackness brings to the forefront the marginalization of nonwhite citizens in Puerto Rico’s media culture and raises important questions about the significance of local sites of television production.

2. Bringing the Soul: Afros, Black Empowerment, and the Resurgent Popularity of Blackface 67