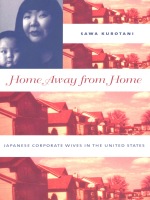 Drawing attention to domestic space as the critical juncture between the global and the local, Home Away from Home is an innovative ethnography of the daily lives of middle-class Japanese housewives who accompany their husbands on temporary corporate job assignments in the United States. These women are charged with the task of creating and maintaining restful Japanese homes in a foreign environment so that their husbands are able to remain productive, loyal workers for Japanese multinationals and their children are properly socialized and educated as Japanese citizens abroad. Arguing that the homemaking components of transnational communities have not received adequate attention, Sawa Kurotani demonstrates how gender dynamics and the politics of the domestic sphere are integral to understanding national identity and transnational mobility.

Kurotani interviewed and spent time with more than 120 women in three U.S. locations with sizable expatriate Japanese communities: Centerville, a pseudonymous Midwestern town; the New York metropolitan area; and North Carolina’s Research Triangle area. She highlights the contradictory situations faced by the transient wives. Their husbands’ assignments in the United States typically last from three to five years, and they frequently emphasize the temporariness of their situation, referring to it as a “long vacation.” Yet they are responsible for creating comfortable homes for their families, which necessitates producing a familiar and permanent environment. Kurotani looks at the dynamic friendships that develop among the wives and describes their feelings about returning to Japan. She conveys how their sense of themselves as Japanese women, of home, and of their relationships with family members are altered by their personal experiences of transnational homemaking.

Sawa Kurotani is Assistant Professor of Anthropology at the University of Redlands in Redlands, California.

REVIEWS
“Sawa Kurotani reveals the centrality of women’s domesticity to transnational mobility among Japanese families and families everywhere. She has a fine and affectionate ethnographic eye.”—Karen Kelsky, author of Women on the Verge: Japanese Women, Western Dreams


“Sawa Kurotani’s absorbing study offers new ethnographic insight into a common manifestation of globalization—the social bubbles created by corporate, government, and military families on foreign assignments. She sensitively analyzes how Japanese company wives in the U.S. work hard to maintain Japanese domesticity and how these efforts inadvertently but powerfully forge a new self-awareness. Home Away from Home teaches us a valuable lesson about how the local is constituted within the global.”—William W. Kelly, editor of Fanning the Flames: Fans and Consumer Culture in Contemporary Japan

3. Homemaking Away from Home 71