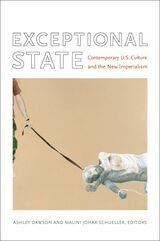 Exceptional State analyzes the nexus of culture and contemporary manifestations of U.S. imperialism. The contributors, established and emerging cultural studies scholars, define culture broadly to include a range of media, literature, and political discourse. They do not posit September 11, 2001 as the beginning of U.S. belligerence and authoritarianism at home and abroad, but they do provide context for understanding U.S. responses to and uses of that event. Taken together, the essays stress both the continuities and discontinuities embodied in a present-day U.S. imperialism constituted through expressions of millennialism, exceptionalism, technological might, and visions of world dominance.

The contributors address a range of topics, paying particular attention to the dynamics of gender and race. Their essays include a surprising reading of the ostensibly liberal movies Wag the Dog and Three Kings, an exploration of the rhetoric surrounding the plan to remake the military into a high-tech force less dependent on human bodies, a look at the significance of the popular Left Behind series of novels, and an interpretation of the Abu Ghraib prison photos. They scrutinize the national narrative created to justify the U.S. invasions of Afghanistan and Iraq, the ways that women in those countries have responded to the invasions, the contradictions underlying calls for U.S. humanitarian interventions, and the role of Africa in the U.S. imperial imagination. The volume concludes on a hopeful note, with a look at an emerging anti-imperialist public sphere.

Ashley Dawson is Associate Professor of English at the City University of New York, College of Staten Island. He is author of Mongrel Nation: Diasporic Culture and the Making of Postcolonial Britain.

Malini Johar Schueller is Professor of English at the University of Florida. She is the author of U.S. Orientalisms: Race, Nation, and Gender in Literature, 1790–1890 and The Politics of Voice: Liberalism and Social Criticism From Franklin to Kingston and a coeditor of Messy Beginnings: Postcoloniality and Early American Studies.

REVIEWS
“Exceptional State is a timely and important collection of essays which together address crucial questions about change and continuity between the current imperial moment and the history of U.S. imperialism.”—Amy Kaplan, coeditor of Cultures of United States Imperialism


“In this superb collection, leading theorists of cultural imperialism adroitly expose why neoliberalism is dangerously beguiling to a nation torn between fear of terrorism and desire to maintain superpower hegemony. Moving from powerful critiques to essays that empower resistance, this volume shows how historical accounts of U.S. imperialism can serve as enabling acts for a democratic future in the making.”—Lee Quinby, author of Millennial Seduction: A Skeptic Confronts Apocalyptic Culture

Planet America: The Revolution in Military Affairs as Fantasy and Fetish / Christian Parenti 88

Hegemony and Rights: On the Liberal Justification for Empire / Omar Dahbour 105

Updating the Gendered Empire: Where Are the Women of Occupied Afghanistan and Iraq? / Cynthia Enloe 133

Techno-Dominance and Torturegate: The Making of US Imperialism / Malini Johar Schueller 162

Left Behind and the Politics of Prophecy Talk / Melani McAlister 191

Putting an Old Africa on Our Map: British Imperial Legacies and Contemporary US Culture / Harilaos Stecopoulos 221