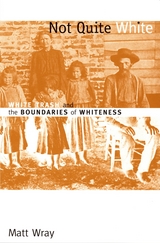 White trash. The phrase conjures up images of dirty rural folk who are poor, ignorant, violent, and incestuous. But where did this stigmatizing phrase come from? And why do these stereotypes persist? Matt Wray answers these and other questions by delving into the long history behind this term of abuse and others like it. Ranging from the early 1700s to the early 1900s, Not Quite White documents the origins and transformations of the multiple meanings projected onto poor rural whites in the United States. Wray draws on a wide variety of primary sources—literary texts, folklore, diaries and journals, medical and scientific articles, social scientific analyses—to construct a dense archive of changing collective representations of poor whites.

Of crucial importance are the ideas about poor whites that circulated through early-twentieth-century public health campaigns, such as hookworm eradication and eugenic reforms. In these crusades, impoverished whites, particularly but not exclusively in the American South, were targeted for interventions by sanitarians who viewed them as “filthy, lazy crackers” in need of racial uplift and by eugenicists who viewed them as a “feebleminded menace” to the white race, threats that needed to be confined and involuntarily sterilized.

Part historical inquiry and part sociological investigation, Not Quite White demonstrates the power of social categories and boundaries to shape social relationships and institutions, to invent groups where none exist, and to influence policies and legislation that end up harming the very people they aim to help. It illuminates not only the cultural significance and consequences of poor white stereotypes but also how dominant whites exploited and expanded these stereotypes to bolster and defend their own fragile claims to whiteness.

Matt Wray is Assistant Professor of Sociology at the University of Nevada, Las Vegas, and a 2006–2008 Robert Wood Johnson Health and Society Scholar at Harvard University. He is a coeditor of The Making and Unmaking of Whiteness; Bad Subjects: Political Education for Everyday Life; and White Trash: Race and Class in America.

REVIEWS
“Matt Wray’s Not Quite White is a richly textured social history of how and why the nation has come to conceive, categorize, and routinely vilify that part of its population known as ‘white trash.’ Because this subject has rarely been the focus of systematic scholarly inquiry, that alone would be a notable achievement. Yet the book aims for more—to propose a boundary theory of why ‘white trash’ has had so many uses—from literature to politics to social science. By any measure, this book is a major contribution.”—Troy Duster, New York University


“White trash? What did you just call me? Not Quite White provides the best social history of America’s most quizzical moniker in the racial-class system. From its colonial origins to the era of eugenics to the public health campaign to eradicate hookworm in the South, Matt Wray’s careful analysis documents the roots of this label, showing what its apparently oxymoronic nature tells us about the larger system of symbolic stratification in the United States.”—Dalton Conley, author of Honky

1. Lubbers, Crackers, and Poor White Trash: Borders and Boundaries in the Colonies and the Early Republic 21

4. “The Disease of Laziness”: Crackers, Poor Whites, and Hookworm Crusaders in the New South 96

5. Limning the Boundaries of Whiteness 133