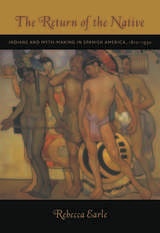 Why does Argentina’s national anthem describe its citizens as sons of the Inca? Why did patriots in nineteenth-century Chile name a battleship after the Aztec emperor Montezuma? Answers to both questions lie in the tangled knot of ideas that constituted the creole imagination in nineteenth-century Spanish America. Rebecca Earle examines the place of preconquest peoples such as the Aztecs and the Incas within the sense of identity—both personal and national—expressed by Spanish American elites in the first century after independence, a time of intense focus on nation-building.

Starting with the anti-Spanish wars of independence in the early nineteenth century, Earle charts the changing importance elite nationalists ascribed to the pre-Columbian past through an analysis of a wide range of sources, including historical writings, poems and novels, postage stamps, constitutions, and public sculpture. This eclectic archive illuminates the nationalist vision of creole elites throughout Spanish America, who in different ways sought to construct meaningful national myths and histories. Traces of these efforts are scattered across nineteenth-century culture; Earle maps the significance of those traces. She also underlines the similarities in the development of nineteenth-century elite nationalism across Spanish America. By offering a comparative study focused on Mexico, Guatemala, Colombia, Peru, Chile, and Ecuador, The Return of the Native illustrates both the common features of elite nation-building and some of the significant variations. The book ends with a consideration of the pro-indigenous indigenista movements that developed in various parts of Spanish America in the early twentieth century.

Rebecca Earle is a Reader in History at the University of Warwick. She is the author of Spain and the Independence of Colombia and the editor of Rumours of War: Civil Conflict in Nineteenth-Century Latin America and Epistolary Selves: Letters and Letter Writers, 1600–1945.

REVIEWS
“Historians interested in nationalism and myth-making will find this book remarkable in its regional scope and in the details of its explanations. This is an excellent book that illuminates how pre-conquest Indians came to symbolize the national pasts from the Rio Brava to Tierra del Fuego.” - Bridget M. Chesterson, Canadian Journal of History


“[T]he achievements of this book are substantial and impressive. . . . This is a book that will stimulate new questions and debates among all historians of nineteenth century Spanish America.” - Nicola Miller, Journal of Latin American Studies


“[A] fascinating, clearly written book . . . [that] investigates the importance and use of the preconquest past and ‘indianesque nationalism’ by elites in Argentina, Chile, Peru, Colombia, Guatemala, and Mexico. . . . Highly recommended.” - M.A. Burkholder, Choice


“[A] fascinating and informative picture of the ways that Spanish American elites in the first century after independence appropriated the ‘Indian’ in their attempts to create national identities for the new republics. . . . Earle’s book is an important contribution to the intellectual and cultural history of the period.” - Peter Blanchard, Bulletin of Latin American Research


“[A] tour-de-force. . . a thoroughly researched and skillfully argued treatise that will reward any scholar, not just Latin Americanist geographers, interested in the ideas, and ideologies, of nationalism and nation-building, especially the distortions, exclusions, and selected borrowings that charge the project.” - W. George Lovell, Journal of Latin American Geography


“In The Return of the Native we find a clever and detailed examination of key components of Spanish American nationhood, such as ideology and power, rather than a general narrative of chronological events. In addition, by taking into consideration the “indigenismo” movement that attempted to bridge the chasm, Earle not only does justice to the genealogy of a political debate, but also shows how current this debate is.” - Héctor James, New Mexico Historical Review


“Rebecca Earle has produced an imaginative work. . . . [T]his book should serve as a benchmark against which to gauge the subsequent rise of populism; native and pan-native mobilizations and movements; and the development of counternarrative national discourses. As such, it deserves a wide audience in and outside academia.” - Susan E. Ramirez, The Journal of American History


“An ambitious and important contribution to Latin American cultural and intellectual history, The Return of the Native is unique in its broad, comparative focus on nationalism in Spanish America and the uses of the Amerindian past. Moreover, it is refreshing in its attention to nineteenth-century historiography and the relation between that historiography and the process of state-building.”—Raymond B. Craib, author of Cartographic Mexico: A History of State Fixations and Fugitive Landscapes

Chapter 4. Patriotic History and the Pre-Columbian Past 100

Chapter 7. Indigenismo: The Return of the Native? 184