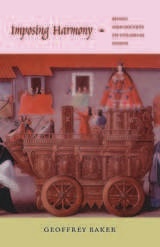 Imposing Harmony is a groundbreaking analysis of the role of music and musicians in the social and political life of colonial Cuzco. Challenging musicology’s cathedral-centered approach to the history of music in colonial Latin America, Geoffrey Baker demonstrates that rather than being dominated by the cathedral, Cuzco’s musical culture was remarkably decentralized. He shows that institutions such as parish churches and monasteries employed indigenous professional musicians, rivaling Cuzco Cathedral in the scale and frequency of the musical performances they staged.

Building on recent scholarship by social historians and urban musicologists and drawing on extensive archival research, Baker highlights European music as a significant vehicle for reproducing and contesting power relations in Cuzco. He examines how Andean communities embraced European music, creating an extraordinary cultural florescence, at the same time that Spanish missionaries used the music as a mechanism of colonialization and control. Uncovering a musical life of considerable and unexpected richness throughout the diocese of Cuzco, Baker describes a musical culture sustained by both Hispanic institutional patrons and the upper strata of indigenous society. Mastery of European music enabled elite Andeans to consolidate their position within the colonial social hierarchy. Indigenous professional musicians distinguished themselves by fulfilling important functions in colonial society, acting as educators, religious leaders, and mediators between the Catholic Church and indigenous communities.

Geoffrey Baker is a Lecturer in the Department of Music at Royal Holloway, University of London.

REVIEWS
“This is an excellent book that discusses critical issues central to our understanding of colonial music and society in an original manner and whose approach, spread over various disciplines, significantly widens the perspectives of the studies published to date. [Baker’s] reconsideration of traditional methods and sources and his open invitation to create a distinctively Latin American historical musicology less dependent on European models represent a considerable challenge for scholars of music in the New World.” - Javier Marín-López, Early Music History


“[T]his book is an invaluable addition to the study of Latin America and should be a fine companion for undergraduate and graduate music research.” - Matthew J. Forss, Canadian Journal of History


“Geoffrey Baker's Imposing Harmony: Music and Society in Colonial Cuzco is an outstanding contribution to both Andean studies and colonial musicology, and it should be read by anyone with an interest in either field.“ - Joshua Tucker, Latin American Music Review


“Geoffrey Baker examines the musical culture—the soundscape—of colonial Cuzco, in all its complexity. He questions traditional scholarship on the music of Cuzco (and elsewhere in Latin America, for that matter) in which the cathedral, with its strongly Hispanic traditions, is understood as the center and focus of viceregal musical culture. In a city that was inhabited by a strong majority of indigenous descent, focus on a cathedral-centered organization rehearses a colonialist perspective. Baker successfully challenges it.”—Carolyn Dean, author of Inka Bodies and the Body of Christ: Corpus Christi in Colonial Cuzco, Peru


“Decentering understanding of the history of music in colonial Cuzco, Geoffrey Baker demonstrates the importance of moving away from the cathedral-centered analyses of the period’s musical culture. Most memorably, he significantly deepens insight into the making of Andean social distinction by bringing to the fore the busy activity of Andean musicians not based in, trained by, or dependent on the Cuzco Cathedral at all.”—Kathryn Burns, author of Colonial Habits: Convents and the Spiritual Economy of Cuzco, Peru


“Geoffrey Baker presents a profound analysis of the fascinating way in which old polyphony made its entry into the New World. Written in a very lively and eloquent style, it is a great read, also for someone who is not a historian and was not even aware of urban musicology as subdiscipline. . . . There are few occasions in which I have read a scholarly book with so much joy.” - Barbara Hogenboom, European Review of Latin American and Caribbean Studies


“What we learn in the end from Baker’s book is not only the richness of
colonial Cuzco’s musical scene but also how little we know about most other
cities in Latin America during their long, complex colonial eras and, more surprisingly, most cities in Spain. . . . His book demonstrates that research on colonial music benefits from many trends in research, just as we all benefit from going back to the archives—not just the local cathedral—with a long list of new questions. I hope Baker’s work will inspire many authors who will produce similar studies on other cities.” - Grayson Wagstaff, Journal of the American Musicological Society

2. The Cathedral and the Seminary of San Antonio Abad 70