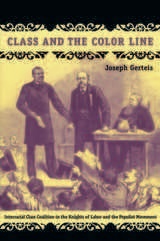 A lauded contribution to historical sociology, Class and the Color Line is an analysis of social-movement organizing across racial lines in the American South during the 1880s and the 1890s. The Knights of Labor and the Populists were the largest and most influential movements of their day, as well as the first to undertake large-scale organizing in the former Confederate states, where they attempted to recruit African Americans as fellow workers and voters.

While scholars have long debated whether the Knights and the Populists were genuine in their efforts to cross the color line, Joseph Gerteis shifts attention from that question to those of how, where, and when the movements’ organizers drew racial boundaries. Arguing that the movements were simultaneously racially inclusive and exclusive, Gerteis explores the connections between race and the movements’ economic and political interests in their cultural claims and in the dynamics of local organizing.

Interpreting data from the central journals of the Knights of Labor and the two major Populist organizations, the Farmers’ Alliance and the People’s Party, Gerteis explains how the movements made sense of the tangled connections between race, class, and republican citizenship. He considers how these collective narratives motivated action in specific contexts: in Richmond and Atlanta in the case of the Knights of Labor, and in Virginia and Georgia in that of the Populists. Gerteis demonstrates that the movements’ collective narratives galvanized interracial organizing to varying degrees in different settings. At the same time, he illuminates the ways that interracial organizing was enabled or constrained by local material, political, and social conditions.

Joseph Gerteis is Associate Professor of Sociology at the University of Minnesota. He is a coeditor of Classical Sociological Theory and Contemporary Sociological Theory. Class and the Color Line won the 2005 President’s Book Award from the Social Science History Association.

2. Race, Class, and Republican Virtue in the Knights of Labor 49

3. The Knights of Labor in Richmond, Virginia 76

4. The Knights of Labor in Atlanta, Georgia 102

5. Race and the Populist “Hayseed Revolution” 126

6. Race and the Agrarian Revolt in Georgia 151

7. Race and the Agrarian Revolt in Virginia 176