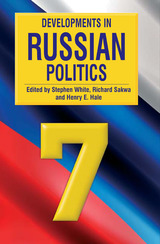 Stephen White is Professor of International Politics at the University of Glasgow and Senior Research Associate at the University’s School of Central and Eastern European Studies. He is the author of Russia’s New Politics: The Management of a Postcommunist Society and the chief editor of The Journal of Communist Studies and Transition Politics.

Henry Hale is Associate Professor of Political Science and International Affairs at George Washington University. He is the author of Why Not Parties in Russia? Democracy, Federalism, and the State.

Richard Sakwa is Professor of Russian and European Politics at the University of Kent. He is the author of Putin: Russia’s Choice.

REVIEWS
“[T]his work is a comprehensive guide to modern Russia and recommended for all readership levels.” - Y. Polsky, Choice


“Developments in Russian Politics 7 is an excellent book and will be valuable to specialists and students who want to understand the framework and trends of Russian politics under Putin and Medvedev.”
- Alan Holiman, Russian Review


Praise for Developments in Russian Politics 6:

“One of the best collections on the post-USSR period of Russia. It contains deep insight into the intricacies of Russian life. Skillfully and clearly written, this book is a worthy contribution to contemporary scholarship.”—Y. Polksy, Choice

Notes on the Contributors xiii

7. The Media and Political Communication / Sarah Oates and Gillian McCormack 118