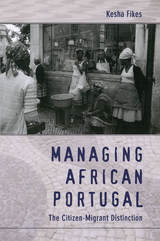 In Managing African Portugal, Kesha Fikes shows how the final integration of Portugal’s economic institutions into the European Union (EU) in the late 1990s changed everyday encounters between African migrants and Portuguese citizens. This economic transition is examined through transformations in ideologies of difference enacted in workspaces in Lisbon between the mid-1990s and the early 2000s. Fikes evaluates shifts in racial discourse and considers how both antiracism and racism instantiate proof of Portugal’s European “conversion” and modernization.

The ethnographic focus is a former undocumented fish market that at one time employed both Portuguese and Cape Verdean women. Both groups eventually sought work in low-wage professions as maids, nannies, and restaurant-kitchen help. The visibility of poor Portuguese women as domestics was thought to undermine the appearance of Portuguese modernity; by contrast, the association of poor African women with domestic work confirmed it. Fikes argues that we can better understand how Portugal interpreted its economic absorption into the EU by attending to the different directions in which working-poor Portuguese and Cape Verdean women were routed in the mid-1990s and by observing the character of the new work relationships that developed among them. In Managing African Portugal, Fikes pushes for a study of migrant phenomena that considers not only how the enactment of citizenship by the citizen manages the migrant, but also how citizens are simultaneously governed through their uptake and assumption of new EU citizen roles.

REVIEWS
“Fikes convincingly links new regulation enforcement to the emergence of novel notions and practices of citizenship. Her focus on citizenship governmentality enables a fruitful articulation between a macro-perspective
(on state legislation and economic reform) and the micro-level approach to individual motives and practices cherished by anthropologists. Managing African Portugal is an interesting. . . exploration of the social consequences of modern European integration on ‘race’ ideologies and relations.” - Ana Mourão, Journal of the Royal Anthropological Association


“[ A] brilliantly written book. . . . This is an important book that finally puts Portugal on the map of an English readership interested in questions of modernity, race, citizenship and nationalism.” - Bernd Reiter, Ethnic and Racial Studies


“Fikes’ book is a thoughtful assessment of how colonial legacies impact contemporary social relations in an EU context and is a poignant critique of how government-sponsored ‘multiculturalist’ programs can increase the marginality of the people they purport to help.” - Samuel Weeks, Etnografica


“In Keisha Fikes’s engaging ethnography, Managing African Portugal, she offers a detailed account of how European Union accession hasmeant the production of the social, political, and economic distinction between migrants and citizens. . . . Through Fikes’s ethnography, the reader sees how the Europeanized demands to distinguish the citizen from the migrant not only make possible a new vision of the Portuguese citizen as ‘white’ and middle class but also forces the ‘African migrant’ away from economic independence and out of public space.” - Damani J. Partridge, American Ethnologist


“Managing African Portugal is a moving ethnography of the fraught but persistent lives of Cape Verdean peixeiras (fishmongers) caught between the cultural logics of citizenship, remittances, and migrant labor. But it is also a searing account of how state-organized anti-racist campaigns, meant to free citizens like the peixeiras from racial violence, can be one of the means of locking them into new forms of class violence.”—Elizabeth A. Povinelli, author of The Empire of Love: Toward a Theory of Intimacy, Genealogy, and Carnality


“Managing African Portugal is a timely and invaluable contribution to the study of African migrants in Europe. Kesha D. Fikes offers a thoughtful examination of how colonialism’s legacies inform the social politics of a European nation-state now significantly embedded within the contours of the European Union. In so doing, she illuminates interpretations of race as historically constituted effects of different political regimes and policies.”—Paulla A. Ebron, author of Performing Africa


“This is a unique study that transcends traditional ethnography. . . . Managing African Portugal is a must-read for anyone interested in the study of postcolonial relations within Europe and the livelihoods of African migrants who are systematically excluded from citizenship.” - Isabel P. B. Fêo Rodrigues, American Anthropologist

4. Being in Place: Domesticating the Citizen-Migrant Distinction 123