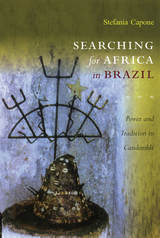 Challenging the usual interpretations of Afro-Brazilian religions as fixed entities, completely independent of one another, Capone reveals these practices as parts of a unique religious continuum. She does so through an analysis of ritual variations as well as discursive practices. To illuminate the continuum of Afro-Brazilian religious practice and the tensions between exegetic discourses and ritual practices, Capone focuses on the figure of Exu, the sacred African trickster who allows communication between gods and men. Following Exu and his avatars, she discloses the centrality of notions of prestige and power—mystical and religious—in Afro-Brazilian religions. To explain how religious identity is constantly negotiated among social actors, Capone emphasizes the agency of practitioners and their political agendas in the “return to roots,” or re-Africanization, movement, an attempt to recover the original purity of a mythical and legitimizing Africa.

Stefania Capone is a Professor at the French National Center for Scientific Research (CNRS) and the University of Paris Ouest Nanterre (France). She is the author of Les Yoruba du Nouveau Monde: Religion, ethnicité et nationalisme noir aux Etats-Unis.

REVIEWS
“[T]he volume still stands admirably on its own. . . . [A] fascinating survey of the history of the field. . . . Capone is especially illuminating in her reading of anthropology and its reification of tradition. . . . Capone’s frank reflections on the field are thought provoking and important. . . .” - Anadelia Romo, The Americas


“Stefania Capone’s Searching for Africa in Brazil provides an important contribution to the study of Afro-American religions that highlights the intellectual, political, and ritualistic complexities of Candomblé. . . . Capone’s study is indeed a pivotal contribution to the discourse on Afro-Brazilian, Black Atlantic, and African Diasporic studies. Her argument is grounded in solid historical assessments of anthropological treatments of Afro-Brazilian religions, provides extensive footnotes that detail field work experiences of the author and pioneers in the field, and includes a comprehensive bibliography of works on Afro-American religions and Yoruba spirituality.” - Abu J. Toure, Journal of Religion in Africa


“Anthropologists and anthropology graduate students will find this volume rich and rewarding. Historians such as myself will take much from the several chapters that trace the evolution of ideas about competing branches of Candomblé beliefs. Capone presents a forceful challenge to long-accepted anthropological methods of studying Candomblé (and, by extension, other religions), pointing out the problematic propensity of students to follow in their advisors’ footsteps by visiting the same sites.” - Walter Hawthorne, History: Reviews of New Books


“Searching for Africa in Brazil is one of the most descriptively rich and analytically insightful treatments of AfroBrazilian religion to date. Every student and ethnographer of Candomblé will undoubtedly do their research a great service if they read this book.” - Emma Cohen, Critique of Anthropology


“The translation of this outstanding work into English is a real service to scholars. Searching for Africa in Brazil is a well researched and carefully argued examination of the ongoing disputations about the origins and transformations in Candomblé. Stefania Capone is particularly insightful regarding the role that outsiders have played in shaping disputes about authenticity, sources, and their relation to African origins.”—Anani Dzidzienyo, co-editor of Neither Enemies nor Friends: Latinos, Blacks, Afro-Latinos


“The originality of this work lies in the disclosure of the incestuous unions between temple and university that together produced a particular version of African tradition. This kind of analysis is not new, but Capone’s study is particularly effective because of its anchoring in the close microstudy of the dramatic changes of ‘tradition’ in Candomblé as those very changes are then reworked as deeply African. . . . It would seem then that this triumph of the tropes of African ‘origins’ and ‘authenticity’ over their rivals in a meta-economy of signs, even for those not of African descent, a semiotic battle richly described in this work, offers pressing new questions for the next generation of research. Stefania Capone’s careful, intelligent study has laid the groundwork to make those sorts of reflections possible.”
- Paul Christopher Johnson, Journal of the American Academy of Religion


“Searching for Africa in Brazil is a major piece of scholarship. Through careful historical research and vivid ethnographic detail, Stefania Capone demonstrates that conceptual pairs such as pure/impure, religious/magical, traditional/modernized, and communal/individualistic have long played a major role in highly self-conscious and overtly politicized representations of Afro-Brazilian religion. This is so both in regards to practitioners’ discourses aimed at legitimizing their forms of practice at the expense of their rivals’ and in regards to the changing views of anthropologists who sought a definitional monopoly over what could count as ‘African,’ ‘traditional,’ and so forth.”—Stephan Palmié, author of Wizards and Scientists: Explorations in Afro-Cuban Modernity and Tradition


-- Paul Christopher Johnson Journal of the American Academy of Religion

Preface to the American Edition ix

Some Notes on Orthography and Pronunciation xiii

Part I. The Metamorphoses of Exu

1. The Messenger of the Gods: Exu in Afro-Brazilian Religions 35

2. The Spirits of Darkness: Exu and Pombagira in Umbanda 69

Part III. The Construction of Tradition

6. Exu and the Anthropologists 173