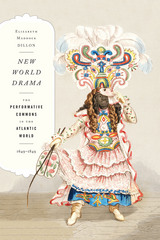 In New World Drama, Elizabeth Maddock Dillon turns to the riotous scene of theatre in the eighteenth-century Atlantic world to explore the creation of new publics. Moving from England to the Caribbean to the early United States, she traces the theatrical emergence of a collective body in the colonized New World—one that included indigenous peoples, diasporic Africans, and diasporic Europeans. In the raucous space of the theatre, the contradictions of colonialism loomed large. Foremost among these was the central paradox of modernity: the coexistence of a massive slave economy and a nascent politics of freedom.

Audiences in London eagerly watched the royal slave, Oroonoko, tortured on stage, while audiences in Charleston and Kingston were forbidden from watching the same scene. Audiences in Kingston and New York City exuberantly participated in the slaying of Richard III on stage, enacting the rise of the "people," and Native American leaders were enjoined to watch actors in blackface "jump Jim Crow." Dillon argues that the theater served as a "performative commons," staging debates over representation in a political world based on popular sovereignty. Her book is a capacious account of performance, aesthetics, and modernity in the eighteenth-century Atlantic world.
AUTHOR BIOGRAPHY
Elizabeth Maddock Dillon is Professor of English at Northeastern University. She is the author of The Gender of Freedom: Fictions of Liberalism and the Literary Public Sphere.
REVIEWS
-- Duncan Faherty Los Angeles Review of Books

Introduction. The Performative Commons and the Aesthetic Atlantic 1