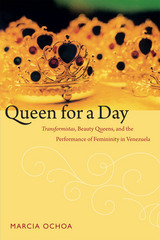 Queen for a Day connects the logic of Venezuelan modernity with the production of a national femininity. In this ethnography, Marcia Ochoa considers how femininities are produced, performed, and consumed in the mass-media spectacles of international beauty pageants, on the runways of the Miss Venezuela contest, on the well-traveled Caracas avenue where transgender women (transformistas) project themselves into the urban imaginary, and on the bodies of both transformistas and beauty pageant contestants (misses). Placing transformistas and misses in the same analytic frame enables Ochoa to delve deeply into complex questions of media and spectacle, gender and sexuality, race and class, and self-fashioning and identity in Venezuela.

Beauty pageants play an outsized role in Venezuela. The country has won more international beauty contests than any other. The femininity performed by Venezuelan women in high-profile, widely viewed pageants defines a kind of national femininity. Ochoa argues that as transformistas and misses work to achieve the bodies, clothing and makeup styles, and postures and gestures of this national femininity, they come to embody Venezuelan modernity.

Marcia Ochoa is Associate Professor of Feminist Studies at the University of California, Santa Cruz.

Part II. On the Runway, on the Street 95