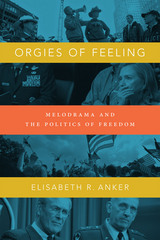 Melodrama is not just a film or literary genre but a powerful political discourse that galvanizes national sentiment to legitimate state violence. Finding virtue in national suffering and heroism in sovereign action, melodramatic political discourses cast war and surveillance as moral imperatives for eradicating villainy and upholding freedom. In Orgies of Feeling, Elisabeth R. Anker boldly reframes political theories of sovereignty, freedom, and power by analyzing the work of melodrama and affect in contemporary politics. Arguing that melodrama animates desires for unconstrained power, Anker examines melodramatic discourses in the War on Terror, neoliberal politics, anticommunist rhetoric, Hollywood film, and post-Marxist critical theory. Building on Friedrich Nietzsche's notion of "orgies of feeling," in which overwhelming emotions displace commonplace experiences of vulnerability and powerlessness onto a dramatic story of injured freedom, Anker contends that the recent upsurge in melodrama in the United States is an indication of public discontent. Yet the discontent that melodrama reflects is ultimately an expression of the public's inability to overcome systemic exploitation and inequality rather than an alarmist response to inflated threats to the nation.
AUTHOR BIOGRAPHY
Elisabeth R. Anker is Assistant Professor of American Studies and Political Science at George Washington University.
REVIEWS
-- R. W. Glover Choice