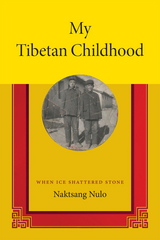 In My Tibetan Chldhood, Naktsang Nulo recalls his life in Tibet's Amdo region during the 1950s. From the perspective of himself at age ten, he describes his upbringing as a nomad on Tibet's eastern plateau. He depicts pilgrimages to monasteries, including a 1500-mile horseback expedition his family made to and from Lhasa. A year or so later, they attempted that same journey as they fled from advancing Chinese troops. Naktsang's father joined and was killed in the little-known 1958 Amdo rebellion against the Chinese People’s Liberation Army, the armed branch of the Chinese Communist Party. During the next year, the author and his brother were imprisoned in a camp where, after the onset of famine, very few children survived.

The real significance of this episodic narrative is the way it shows, through the eyes of a child, the suppressed histories of China's invasion of Tibet. The author's matter-of-fact accounts cast the atrocities that he relays in stark relief. Remarkably, Naktsang lived to tell his tale. His book was published in 2007 in China, where it was a bestseller before the Chinese government banned it in 2010. It is the most reprinted modern Tibetan literary work. This translation makes a fascinating if painful period of modern Tibetan history accessible in English.
AUTHOR BIOGRAPHY
Naktsang Nulo (born in 1949) worked as an official in the Chinese government, serving as a primary school teacher, police officer, judge, prison governor, and county leader in Qinghai province, China, before retiring in 1993.


-- A. Tom Grunfeld The China Journal

Introduction. A Note on Context and Significance / Robert Barnett xv

1. Born on the Wide Tibetan Grasslands 13

2. A Childhood with Herdsman, Bandits, and Monks 49

4. Witness to Massacre on Our Tragic Journey through Desolate Places 131

5. Torture and Imprisonment, Starvation and Survival 183

Appendix. Guide to the Abridgment and Chapter Changes from Original 269