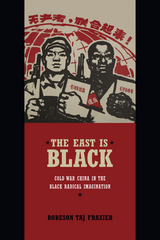 During the Cold War, several prominent African American radical activist-intellectuals—including W.E.B. and Shirley Graham Du Bois, journalist William Worthy, Marxist feminist Vicki Garvin, and freedom fighters Mabel and Robert Williams—traveled and lived in China. There, they used a variety of media to express their solidarity with Chinese communism and to redefine the relationship between Asian struggles against imperialism and black American movements against social, racial, and economic injustice. In The East Is Black, Taj Frazier examines the ways in which these figures and the Chinese government embraced the idea of shared struggle against U.S. policies at home and abroad. He analyzes their diverse cultural output (newsletters, print journalism, radio broadcasts, political cartoons, lectures, and documentaries) to document how they imagined communist China’s role within a broader vision of a worldwide anticapitalist coalition against racism and imperialism.
AUTHOR BIOGRAPHY
Robeson Taj Frazier is Assistant Professor at the Annenberg School for Communication and Journalism at the University of Southern California.
REVIEWS
-- Cindy I-Fen Cheng Journal of American History

Introduction: March of the Volunteers 1

3. Soul Brothers and Soul Sisters of the East 117

4. Maoism and the Sinification of Black Political Struggle 159

Coda. The 1970s: Rapprochement and the Decline of China's World Revolution 193