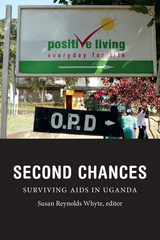 During the first decade of this millennium, many thousands of people in Uganda who otherwise would have died from AIDS got second chances at life. A massive global health intervention, the scaling up of antiretroviral therapy (ART), saved them and created a generation of people who learned to live with treatment. As clients they joined programs that offered free antiretroviral medicine and encouraged "positive living." Because ART is not a cure but a lifelong treatment regime, its consequences are far-reaching for society, families, and individuals. Drawing on personal accounts and a broad knowledge of Ugandan culture and history, the essays in this collection explore ART from the perspective of those who received second chances. Their concerns about treatment, partners, children, work, food, and bodies reveal the essential sociality of Ugandan life. The collection is based on research undertaken by a team of social scientists including both Western and African scholars.

Case I. Robinah and Joyce: The Connecting Sisters 25