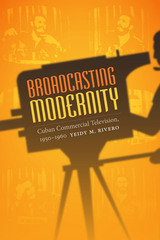 The birth and development of commercial television in Cuba in the 1950s occurred alongside political and social turmoil. In this period of dramatic swings encompassing democracy, a coup, a dictatorship, and a revolution, television functioned as a beacon and promoter of Cuba’s identity as a modern nation. In Broadcasting Modernity, television historian Yeidy M. Rivero shows how television owners, regulatory entities, critics, and the state produced Cuban modernity for television. The Cuban television industry enabled different institutions to convey the nation's progress, democracy, economic abundance, high culture, education, morality, and decency. After nationalizing Cuban television, the state used it to advance Fidel Castro's project of creating a modern socialist country. As Cuba changed, television changed with it. Rivero not only demonstrates television's importance to Cuban cultural identity formation, she explains how the medium functions in society during times of radical political and social transformation.
AUTHOR BIOGRAPHY
Yeidy M. Rivero is Associate Professor of Screen Arts and Cultures at the University of Michigan. She is the author of Tuning Out Blackness: Race and Nation in the History of Puerto Rican Television, also published by Duke University Press.
REVIEWS
-- Louis A. Pérez Jr. American Historical Review

1. Prelude to the Spectacles: Constituting a Modern Broadcasting System through the Law, 1923–1950  23

2. Spectacles of Progress: Technology, Expansion, and the Law  45

3. Spectacles of Decency: Morality as a Matter of the Industry and the State  75

5. Spectacles of Revolution: A Rebirth of Cubanness  129