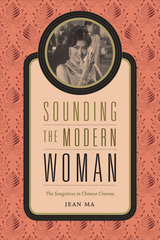 From the beginning of the sound cinema era, singing actresses captivated Chinese audiences. In Sounding the Modern Woman, Jean Ma shows how their rise to stardom attests to the changing roles of women in urban modernity and the complex symbiosis between the film and music industries. The songstress—whether appearing as an opera actress, showgirl, revolutionary, or country lass—belongs to the lineage of the Chinese modern woman, and her forty year prevalence points to a distinctive gendering of lyrical expression in Chinese film. Ma guides readers through film history by way of the on and off-screen careers of many of the most compelling performers in Chinese film history, such as Zhou Xuan and Grace Chang, revealing the ways that national crises and Cold War conflict shaped their celebrity. As a bridge between the film cultures of prewar Shanghai and postwar Hong Kong, the songstress brings into view a dense web of connections linking these two periods and places that cut across the divides of war, national politics, and geography.
AUTHOR BIOGRAPHY
Jean Ma is Associate Professor of Art and Art History at Stanford University. She is the author of Melancholy Drift: Marking Time in Chinese Cinema, and coeditor of Moving: Between Cinema and Photography, also published by Duke University Press.
REVIEWS
-- G. A. Foster Choice