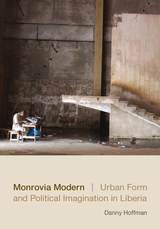 In Monrovia Modern Danny Hoffman uses the ruins of four iconic modernist buildings in Monrovia, Liberia, as a way to explore the relationship between the built environment and political imagination. Hoffman shows how the E. J. Roye tower and the Hotel Africa luxury resort, as well as the unfinished Ministry of Defense and Liberia Broadcasting System buildings, transformed during the urban warfare of the 1990s from symbols of the modernist project of nation-building to reminders of the challenges Monrovia's residents face. The transient lives of these buildings' inhabitants, many of whom are ex-combatants, prevent them from making place-based claims to a right to the city and hinder their ability to think of ways to rebuild and repurpose their built environment. Featuring nearly 100 of Hoffman's color photographs, Monrovia Modern is situated at the intersection of photography, architecture, and anthropology, mapping out the possibilities and limits for imagining an urban future in Monrovia and beyond.
AUTHOR BIOGRAPHY
Danny Hoffman is Associate Professor of Anthropology at the University of Washington and the author of The War Machines: Young Men and Violence in Sierra Leone and Liberia, also published by Duke University Press. As a photojournalist, he documented conflicts in southern Africa and the Balkans from 1994 to 1998.
REVIEWS
-- Pauline Destree Allegra Lab