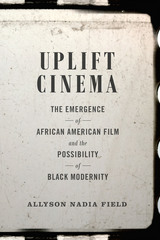 In Uplift Cinema, Allyson Nadia Field recovers the significant yet forgotten legacy of African American filmmaking in the 1910s. Like the racial uplift project, this cinema emphasized economic self-sufficiency, education, and respectability as the keys to African American progress. Field discusses films made at the Tuskegee and Hampton Institutes to promote education, as well as the controversial The New Era, which was an antiracist response to D. W. Griffith's The Birth of a Nation. She also shows how Black filmmakers in New York and Chicago engaged with uplift through the promotion of Black modernity. Uplift cinema developed not just as a response to onscreen racism, but constituted an original engagement with the new medium that has had a deep and lasting significance for African American cinema. Although none of these films survived, Field's examination of archival film ephemera presents a method for studying lost films that opens up new frontiers for exploring early film culture.
AUTHOR BIOGRAPHY
Allyson Nadia Field is Assistant Professor of Cinema and Media Studies at the University of California, Los Angeles.
REVIEWS
-- Gerald R. Butters Jr. Journal of American History

1. The Aesthetics of Uplift: The Hampton-Tuskegee Idea and the Possibility of Failure 33

2. "To Show the Industrial Progress of the Negro Along Industrial Lines": Uplift Cinema Entrepreneurs at Tuskegee Institute, 1909–1913 83