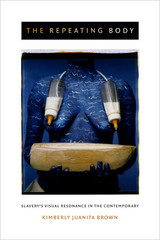 Haunted by representations of black women that resist the reality of the body's vulnerability, Kimberly Juanita Brown traces slavery's afterlife in black women's literary and visual cultural productions. Brown draws on black feminist theory, visual culture studies, literary criticism, and critical race theory to explore contemporary visual and literary representations of black women's bodies that embrace and foreground the body's vulnerability and slavery's inherent violence. She shows how writers such as Gayl Jones, Toni Morrison, Audre Lorde, and Jamaica Kincaid, along with visual artists Carrie Mae Weems and María Magdalena Campos-Pons, highlight the scarred and broken bodies of black women by repeating, passing down, and making visible the residues of slavery's existence and cruelty. Their work not only provides a corrective to those who refuse to acknowledge that vulnerability, but empowers black women to create their own subjectivities. In The Repeating Body, Brown returns black women to the center of discourses of slavery, thereby providing the means with which to more fully understand slavery's history and its penetrating reach into modern American life.
AUTHOR BIOGRAPHY
Kimberly Juanita Brown is Assistant Professor of English and Africana Studies at Mount Holyoke College.
REVIEWS

Introduction: Visualizing the Body of the Black Atlantic  1

2. Fragmented Figurations of the Maternal  57

4. The Return: Conjuring the Figure, Following the Form  138

Conclusion: Photographic Incantations of the Visual  177