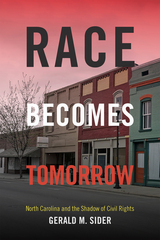 In Race Becomes Tomorrow Gerald M. Sider weaves together stories from his civil rights activism, his youth, and his experiences as an anthropologist to investigate the dynamic ways race has been constructed and lived in America since the 1960s. Tacking between past and present, Sider describes how political power, economic control, and racism inject chaos into the lives of ordinary people, especially African Americans, with surprising consequences. In addition to recounting his years working on voter registration in rural North Carolina, Sider makes connections between numerous issues, from sharecropping and deindustrialization to the recessions of the 1970s and 2008, the rise of migrant farm labor, and contemporary living-wage campaigns. Sider's stories—whether about cockroach races in immigrant homes, degrading labor conditions, or the claims and failures of police violence—provide numerous entry points into gaining a deeper understanding of how race and power both are and cannot be lived. They demonstrate that race is produced and exists in unpredictability, and that the transition from yesterday to tomorrow is anything but certain.
AUTHOR BIOGRAPHY
Gerald M. Sider is Emeritus Professor of Anthropology at the Graduate Center and the College of Staten Island, City University of New York, and the author of Skin for Skin: Death and Life for Inuit and Innu, also published by Duke University Press.
REVIEWS
-- The Triangle Tribune