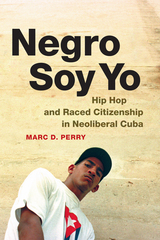 In Negro Soy Yo Marc D. Perry explores Cuba’s hip hop movement as a window into the racial complexities of the island’s ongoing transition from revolutionary socialism toward free-market capitalism. Centering on the music and lives of black-identified raperos (rappers), Perry examines the ways these young artists craft notions of black Cuban identity and racial citizenship, along with calls for racial justice, at the fraught confluence of growing Afro-Cuban marginalization and long held perceptions of Cuba as a non-racial nation. Situating hip hop within a long history of Cuban racial politics, Perry discusses the artistic and cultural exchanges between raperos and North American rappers and activists, and their relationships with older Afro-Cuban intellectuals and African American political exiles. He also examines critiques of Cuban patriarchy by female raperos, the competing rise of reggaetón, as well as state efforts to incorporate hip hop into its cultural institutions. At this pivotal moment of Cuban-U.S. relations, Perry's analysis illuminates the evolving dynamics of race, agency, and neoliberal transformation amid a Cuba in historic flux.
AUTHOR BIOGRAPHY
Marc D. Perry is Assistant Professor of Anthropology and African and African Diaspora Studies at Tulane University.
REVIEWS
-- Scratched Vinyl


-- Reginald A. Bess The Latin Americanist

4. Critical Self-Fashionings and Their Gendering  135