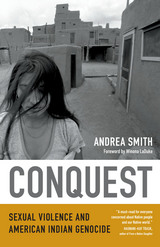 In this revolutionary text, prominent Native American studies scholar and activist Andrea Smith reveals the connections between different forms of violence—perpetrated by the state and by society at large—and documents their impact on Native women. Beginning with the impact of the abuses inflicted on Native American children at state-sanctioned boarding schools from the 1880s to the 1980s, Smith adroitly expands our conception of violence to include the widespread appropriation of Indian cultural practices by whites and other non-Natives; environmental racism; and population control. Smith deftly connects these and other examples of historical and contemporary colonialism to the high rates of violence against Native American women—the most likely to suffer from poverty-related illness and to survive rape and partner abuse. Smith also outlines radical and innovative strategies for eliminating gendered violence.
AUTHOR BIOGRAPHY
Andrea Smith is Associate Professor of Ethnic Studies and Media and Cultural Studies at the University of California, Riverside. She is the author of Native Americans and the Christian Right: The Gendered Politics of Unlikely Alliances and coeditor of Theorizing Native Studies, both also published by Duke University Press.
REVIEWS
-- Julia Sudbury editor of Global Lockdown: Race Gender and the Prison-Industrial Complex

1. Sexual Violence as a Tool of Genocide  7

2. Boarding School Abuses and the Case for Reparations  35