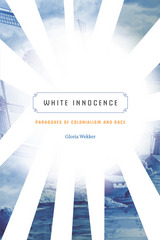 In White Innocence Gloria Wekker explores a central paradox of Dutch culture: the passionate denial of racial discrimination and colonial violence coexisting alongside aggressive racism and xenophobia. Accessing a cultural archive built over 400 years of Dutch colonial rule, Wekker fundamentally challenges Dutch racial exceptionalism by undermining the dominant narrative of the Netherlands as a "gentle" and "ethical" nation. Wekker analyzes the Dutch media's portrayal of black women and men, the failure to grasp race in the Dutch academy, contemporary conservative politics (including gay politicians espousing anti-immigrant rhetoric), and the controversy surrounding the folkloric character Black Pete, showing how the denial of racism and the expression of innocence safeguards white privilege. Wekker uncovers the postcolonial legacy of race and its role in shaping the white Dutch self, presenting the contested, persistent legacy of racism in the country.
AUTHOR BIOGRAPHY
Gloria Wekker is Professor Emeritus of Gender Studies at Utrecht University and the author of several books, including The Politics of Passion: Women's Sexual Culture in the Afro-Surinamese Diaspora.
REVIEWS
-- Nick Barr Clingan The Nation

3. The Coded Language of Hottentot Nymphae and the Discursive Presence of Race, 1917  81

4. Of Homo Nostalgia and (Post)Coloniality: Or, Where Did All the Critical White Gay Men Go?  108