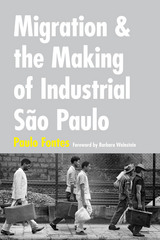 Published in 2008 and winner of the 2011 Thomas E. Skidmore Prize, Paulo Fontes's Migration and the Making of Industrial São Paulo is a detailed social history of São Paulo's extraordinary urban and industrial expansion. Fontes focuses on those migrants who settled in the suburb of São Miguel Paulista, which grew from 7,000 residents in the 1940s to over 140,000 two decades later. Reconstructing these migrants' everyday lives within a broad social context, Fontes examines the economic conditions that prompted their migration, their creation of an integrated identity and community, and their efforts to gain worker rights. Fontes challenges the stereotypes of Northeasterners as culturally backward, uneducated, violent, and unreliable, instead seeing them as a resourceful population with considerable social and political resolve. Fontes's investigations into Northeastern life in São Miguel Paulista yield a fresh understanding of São Paulo's incredible and difficult growth while outlining how a marginalized population exercised its political agency.
AUTHOR BIOGRAPHY
Paulo Fontes is Associate Professor, School of Social Sciences (CPDOC) Fundação Getulio Vargas – Rio de Janeiro; a researcher at the Brazilian Council of Research and Development (CNPq); and the coeditor of The Country of Football: Politics, Popular Culture, and the Beautiful Game in Brazil.

Barbara Weinstein is Silver Professor of History at New York University and the author of The Color of Modernity: São Paulo and the Making of Race and Nation in Brazil, also published by Duke University Press.
REVIEWS
-- B. A. Lucero Choice

1. A Cardboard Suitcase and a Backpack: Northeastern Migration to São Paulo in the 1950s  15

2. Land of the Northeasterners: Migration, Urbanization, and Factory Work in São Miguel Paulista  48

4. The Right to Practice Politics: Parties and Political Leadership in São Miguel Paulista  131

5. Workers and the Neighborhood: Social Movements and the Struggle for Autonomy  178