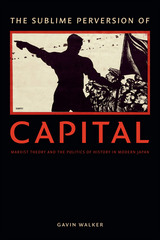 In The Sublime Perversion of Capital Gavin Walker examines the Japanese debate about capitalism between the 1920s and 1950s, using it as a "prehistory" to consider current discussions of uneven development and contemporary topics in Marxist theory and historiography. Walker locates the debate's culmination in the work of Uno Kōzō, whose investigations into the development of capitalism and the commodification of labor power are essential for rethinking the national question in Marxist theory. Walker's analysis of Uno and the Japanese debate strips Marxist historiography of its Eurocentric focus, showing how Marxist thought was globalized from the start. In analyzing the little-heralded tradition of Japanese Marxist theory alongside Marx himself, Walker not only offers new insights into the transition to capitalism, the rise of globalization, and the relation between capital and the formation of the nation-state; he provides new ways to break Marxist theory's impasse with postcolonial studies and critical theory.
AUTHOR BIOGRAPHY
Gavin Walker is Assistant Professor of History and East Asian Studies at McGill University.
REVIEWS
"Walker’s book does much to clarify the relevance of Uno’s work for both historical research and studies of the present moment; it occupies a central place in the on-going 'Uno Renaissance.'"

"Walker’s work offers something of value to both economic historians as well as Japanologists: an opportunity to catch a glimpse of the contributions of Japanese intellectuals as you focus on the tensions of Marxism and capitalism for the former and a review (if not (re)discovery) of the essentials of Marxism and capitalist theory while in pursuit of the history of contemporary Japanese social sciences for the latter."

“Original and erudite. . . . Gavin Walker develops a wide-ranging and densely argued Marxist theoretical account of capital and its (il)logics. The heart of his inquiry is what he calls capital’s “sublime perversion”: its ability to overcome, without resolving, its own contradictions, its 'constant and relentless transformation of limits into thresholds.' Walker’s theorization of this perversion interweaves a set of concepts and approaches derived from Marx and from Walker’s extensive reading (in, by my count, seven languages) of twentieth- and early twenty-first-century thinkers.”

"Gavin Walker’s book on the Japanese capitalism debate of the 1920s and 1930s, The Sublime Perversion of Capital, brings this important set of arguments on Marxist theory and history out of the domain of Japanese studies, where it is often cited but scarcely appreciated, and into dialogue with contemporary historiography and political theory. . . . The Sublime Perversion of Capital is an important and singular contribution to scholarship on Marxism and capitalism. It restores the sophistication of interwar Japanese debates on the country’s development and the development of capitalism on a global scale. Walker shows the significance of these debates for Marxism at a time when the Comintern’s dicta were challenged by the heterogeneity of the global political economy. His book thus reinstates the historicity of debates on the nature of capitalism and its historical manifestation, then and now.”

"A truly interdisciplinary work that understands Japanese Marxism as part of a larger global moment. . . .Through Japanese Marxist writings, [Walker] shows how capital needs the state to commodify labor power, leading to a global system of borders and policing. In this light one might compare the book to recent Althusserian readings of Marx that theorize capitalism as comprising class structures related to the market, state, and world system. Walker also gestures in the direction of combined and uneven development and attempts to posit an alternative to the theoretical impasse between universal- ism and particularism by grounding both in a theory of capitalism. The Sublime Perversion of Capital remains essential reading for scholars interested in area studies, Japanese intellectual history, and Marxist theory and helps us rethink the role that capitalism and the nation-state play in shaping the world in which we live.”

"The Sublime Perversion of Capital makes an important intervention in both Japanese intellectual history and Marxist theory."

1. The Sublime Perversion of Capital   1

2. The Feudal Remnant and the Historical Outside  28

3. Primitive Accumulation, or the Logic of Origin  75

5. The Continent of History and the Theoretical Inside  152