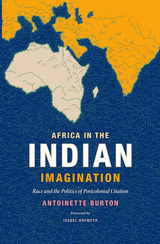 In Africa in the Indian Imagination Antoinette Burton reframes our understanding of the postcolonial Afro-Asian solidarity that emerged from the 1955 Bandung conference. Afro-Asian solidarity is best understood, Burton contends, by using friction as a lens to expose the racial, class, gender, sexuality, caste, and political tensions throughout the postcolonial global South. Focusing on India's imagined relationship with Africa, Burton historicizes Africa's role in the emergence of a coherent postcolonial Indian identity. She shows how—despite Bandung's rhetoric of equality and brotherhood—Indian identity echoed colonial racial hierarchies in its subordination of Africans and blackness. Underscoring Indian anxiety over Africa and challenging the narratives and dearly held assumptions that presume a sentimentalized, nostalgic, and fraternal history of Afro-Asian solidarity, Burton demonstrates the continued need for anti-heroic, vexed, and fractious postcolonial critique.
AUTHOR BIOGRAPHY
Antoinette Burton is Professor of History and Catherine C. and Bruce A. Bastian Professor of Global and Transnational Studies at the University of Illinois, Urbana-Champaign. She has written and edited many books, including Ten Books That Shaped the British Empire: Creating an Imperial Commons, Postcolonial Studies and Beyond, and A Primer for Teaching World History: Ten Design Principles, all also published by Duke University Press.

Isabel Hofmeyr is Professor of African Literature at the University of the Witwatersrand, Johannesburg and the author of Gandhi's Printing Press: Experiments in Slow Reading.
REVIEWS
-- Luca Raimondi African Studies Quarterly

2. Race and the Politics of Position: Above and Below in Frank Moraes' The Importance of Being Black (1965)  57

3. Fictions of Postcolonial Development: Race, Intimacy and Afro-Asian Solidarity in Chanakya Sen's The Morning After (1973)  89