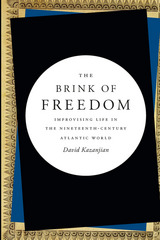 In The Brink of Freedom David Kazanjian revises nineteenth-century conceptions of freedom by examining the ways black settler colonists in Liberia and Mayan rebels in Yucatán imagined how to live freely. Focusing on colonial and early national Liberia and the Caste War of Yucatán, Kazanjian interprets letters from black settlers in apposition to letters and literature from Mayan rebels and their Creole antagonists. He reads these overlooked, multilingual archives not for their descriptive content, but for how they unsettle and recast liberal forms of freedom within global systems of racial capitalism. By juxtaposing two unheralded and seemingly unrelated Atlantic histories, Kazanjian finds remarkably fresh, nuanced, and worldly conceptions of freedom thriving amidst the archived everyday. The Brink of Freedom’s speculative, quotidian globalities ultimately ask us to improvise radical ways of living in the world.
AUTHOR BIOGRAPHY
David Kazanjian is Professor of English and Comparative Literature at the University of Pennsylvania and the author of The Colonizing Trick: National Culture and Imperial Citizenship in Early America.
REVIEWS
"Terrific. . . . Innovative."

"Kazanjian has constructed an extensively well-researched and theoretically complex study that develops a new approach to comparative scholarship, highlights new paths to archival research, and suggests new reading strategies that help us examine how non-European actors imagined a future defined by freedom, one of the principal tenets of modernity and of nineteenth-century liberalism."

“The Brink of Freedom is an innovative study that serves as a model for interdisciplinary research.”

1. It All Most Cost Us Death Seeking Life: Recursive Returns and Unsettled Nativities  53

2. Suffering Gain and It Remain: The Speculative Freedom of Early Liberia  91

Coda: Archives for the Future  227