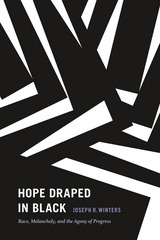 In Hope Draped in Black Joseph R. Winters responds to the enduring belief that America follows a constant trajectory of racial progress. Such notions—like those that suggested the passage into a postracial era following Barack Obama's election—gloss over the history of racial violence and oppression to create an imaginary and self-congratulatory world where painful memories are conveniently forgotten. In place of these narratives, Winters advocates for an idea of hope that is predicated on a continuous engagement with loss and melancholy. Signaling a heightened sensitivity to the suffering of others, melancholy disconcerts us and allows us to cut against dominant narratives and identities. Winters identifies a black literary and aesthetic tradition in the work of intellectuals, writers, and artists such as W. E. B. Du Bois, Ralph Ellison, Toni Morrison, and Charles Burnett that often underscores melancholy, remembrance, loss, and tragedy in ways that gesture toward such a conception of hope. Winters also draws on Walter Benjamin and Theodor Adorno to highlight how remembering and mourning the uncomfortable dimensions of American social life can provide alternate sources for hope and imagination that might lead to building a better world.
AUTHOR BIOGRAPHY
Joseph R. Winters is Assistant Professor of Religious Studies at Duke University.
REVIEWS
-- Alex Zamalin Political Theory


-- Bianca Borrero-Barreras Journal of the North Carolina Association of Historians


-- William David Hart Journal of the American Academy of Religion

1. Unreconciled Strivings: Du Bois, the Seduction of Optimism, and the Legacy of Sorrow  31

2. Unhopeful but Not Hopeless: Melancholic Interpretations of Progress and Freedom  57

3. Hearing the Breaks and Cuts of History: Ellison, Morrison, and the Uses of Literary Jazz  85

5. Figures of the Postracial: Race, Nation, and Violence in the Age of Obama and Morrison  187