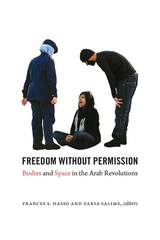 As the 2011 uprisings in North Africa reverberated across the Middle East, a diverse cross section of women and girls publicly disputed gender and sexual norms in novel, unauthorized, and often shocking ways. In a series of case studies ranging from Tunisia's 14 January Revolution to the Taksim Gezi Park protests in Istanbul, the contributors to Freedom without Permission reveal the centrality of the intersections between body, gender, sexuality, and space to these groundbreaking events. Essays include discussions of the blogs written by young women in Egypt, the Women2Drive campaign in Saudi Arabia, the reintegration of women into the public sphere in Yemen, the sexualization of female protesters encamped at Bahrain's Pearl Roundabout, and the embodied, performative, and artistic spaces of Morocco's 20 February Movement. Conceiving of revolution as affective, embodied, spatialized, and aesthetic forms of upheaval and transgression, the contributors show how women activists imagined, inhabited, and deployed new spatial arrangements that undermined the public-private divisions of spaces, bodies, and social relations, continuously transforming them through symbolic and embodied transgressions.
Contributors. Lamia Benyoussef, Susanne Dahlgren, Karina Eileraas, Susana Galan, Banu Gökariksel, Frances S. Hasso, Sonali Pahwa, Zakia Salime
AUTHOR BIOGRAPHY
Frances S. Hasso is Associate Professor of Women's Studies and Sociology at Duke University and the author of Resistance, Repression, and Gender Politics in Occupied Palestine and Jordan and Consuming Desires: Family Crisis and the State in the Middle East.

Zakia Salime is Associate Professor of Sociology and Women's and Gender Studies at Rutgers University and the author of Between Feminism and Islam: Human Rights and Sharia Law in Morocco.
REVIEWS
-- Autumn R. Cockrell-Abdullah Journal of International and Global Studies

1. Politics in the Digital Boudoir: Sentimentality and the Transformation of Civil Debate in Egyptian Women's Blogs / Sonali Pahwa  25

2. Gender and the Fractured Mythscapes of National Identity in Revolutionary Tunisia / Lamia Benyoussef  51

5. "The Women Are Coming": Gender, Space, and the Politics of Inauguration / Zakia Salime  138