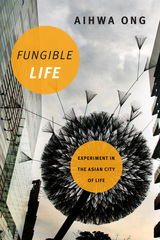 In Fungible Life Aihwa Ong explores the dynamic world of cutting-edge bioscience research, offering critical insights into the complex ways Asian bioscientific worlds and cosmopolitan sciences are entangled in a tropical environment brimming with the threat of emergent diseases. At biomedical centers in Singapore and China scientists map genetic variants, disease risks, and biomarkers, mobilizing ethnicized "Asian" bodies and health data for genomic research. Their differentiation between Chinese, Indian, and Malay DNA makes fungible Singapore's ethnic-stratified databases that come to "represent" majority populations in Asia. By deploying genomic science as a public good, researchers reconfigure the relationships between objects, peoples, and spaces, thus rendering "Asia" itself as a shifting entity. In Ong's analysis, Asia emerges as a richly layered mode of entanglements, where the population's genetic pasts, anxieties and hopes, shared genetic weaknesses, and embattled genetic futures intersect. Furthermore, her illustration of the contrasting methods and goals of the Biopolis biomedical center in Singapore and BGI Genomics in China raises questions about the future direction of cosmopolitan science in Asia and beyond.
AUTHOR BIOGRAPHY
Aihwa Ong is Robert H. Lowie Distinguished Chair in Anthropology at the University of California, Berkeley, the author of Neoliberalism as Exception: Mutations in Citizenship and Sovereignty and Flexible Citizenship: The Cultural Logics of Transnationality, and the coeditor of Asian Biotech: Ethics and Communities of Fate, all also published by Duke University Press.
REVIEWS
-- Flora Samuel Times Higher Education


-- Katherine A. Mason The Asia Pacific Journal of Anthropology

Introduction: Inventing a City of Life  1

4. The Productive Uncertainty of Bioethics  93

Epilogue: A DNA Bridge and an Octopus's Garden  223