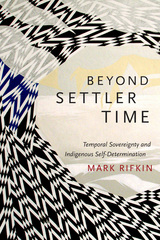 What does it mean to say that Native peoples exist in the present?  In Beyond Settler Time Mark Rifkin investigates the dangers of seeking to include Indigenous peoples within settler temporal frameworks. Claims that Native peoples should be recognized as coeval with Euro-Americans, Rifkin argues, implicitly treat dominant non-native ideologies and institutions as the basis for defining time itself. How, though, can Native peoples be understood as dynamic and changing while also not assuming that they belong to a present inherently shared with non-natives? Drawing on physics, phenomenology, queer studies, and postcolonial theory, Rifkin develops the concept of "settler time" to address how Native peoples are both consigned to the past and inserted into the present in ways that normalize non-native histories, geographies, and expectations. Through analysis of various kinds of texts, including government documents, film, fiction, and autobiography, he explores how Native experiences of time exceed and defy such settler impositions. In underscoring the existence of multiple temporalities, Rifkin illustrates how time plays a crucial role in Indigenous peoples’ expressions of sovereignty and struggles for self-determination.
AUTHOR BIOGRAPHY
Mark Rifkin is Director of the Women's and Gender Studies Program and Professor of English at the University of North Carolina, Greensboro and the author of several books, including Settler Common Sense: Queerness and Everyday Colonialism in the American Renaissance.
REVIEWS
-- Stephanie Lumsden Studies in American Indian Literatures