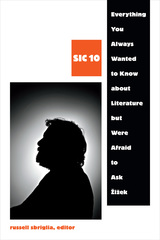 Challenging the widely-held assumption that Slavoj Žižek's work is far more germane to film and cultural studies than to literary studies, this volume demonstrates the importance of Žižek to literary criticism and theory. The contributors show how Žižek's practice of reading theory and literature through one another allows him to critique, complicate, and advance the understanding of Lacanian psychoanalysis and German Idealism, thereby urging a rethinking of historicity and universality. His methodology has implications for analyzing literature across historical periods, nationalities, and genres and can enrich theoretical frameworks ranging from aesthetics, semiotics, and psychoanalysis to feminism, historicism, postcolonialism, and ecocriticism. The contributors also offer Žižekian interpretations of a wide variety of texts, including Geoffrey Chaucer's Troilus and Criseyde, Shakespeare's The Merchant of Venice, Samuel Beckett's Not I, and William Burroughs's Nova Trilogy. The collection includes an essay by Žižek on subjectivity in Shakespeare and Beckett. Everything You Always Wanted to Know about Literature but Were Afraid to Ask Žižek affirms Žižek's value to literary studies while offering a rigorous model of Žižekian criticism.
Contributors. Shawn Alfrey, Daniel Beaumont, Geoff Boucher, Andrew Hageman, Jamil Khader, Anna Kornbluh, Todd McGowan, Paul Megna, Russell Sbriglia, Louis-Paul Willis, Slavoj Žižek
AUTHOR BIOGRAPHY
Russell Sbriglia is Assistant Professor of English at Seton Hall University.
REVIEWS
-- Alenka Zupancic, author of Ethics of the Real: Kant and Lacan