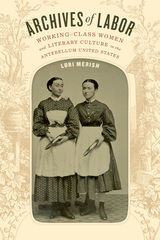 In Archives of Labor Lori Merish establishes working-class women as significant actors within literary culture, dramatically redrawing the map of nineteenth-century US literary and cultural history. Delving into previously unexplored archives of working-class women's literature—from autobiographies, pamphlet novels, and theatrical melodrama to seduction tales and labor periodicals—Merish recovers working-class women's vital presence as writers and readers in the antebellum era. Her reading of texts by a diverse collection of factory workers, seamstresses, domestic workers, and prostitutes boldly challenges the purportedly masculine character of class dissent during this era. Whether addressing portrayals of white New England "factory girls," fictional accounts of African American domestic workers, or the first-person narratives of Mexican women working in the missions of Mexican California, Merish unsettles the traditional association of whiteness with the working class to document forms of cross-racial class identification and solidarity. In so doing, she restores the tradition of working women's class protest and dissent, shows how race and gender are central to class identity, and traces the ways working women understood themselves and were understood as workers and class subjects.
AUTHOR BIOGRAPHY
Lori Merish is Associate Professor of English at Georgetown University and the author of Sentimental Materialism: Gender, Commodity Culture, and Nineteenth-Century American Literature, also published by Duke University Press.
REVIEWS
-- Stephanie Kelley TLS