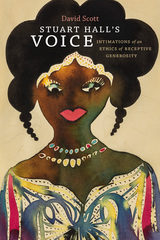 Stuart Hall’s Voice explores the ethos of style that characterized Stuart Hall’s intellectual vocation. David Scott frames the book—which he wrote as a series of letters to Hall in the wake of his death—as an evocation of friendship understood as the moral and intellectual medium in which his dialogical hermeneutic relationship with Hall’s work unfolded. In this respect, the book asks: what do we owe intellectually to the work of those whom we know well, admire, and honor? Reflecting one of the lessons of Hall’s style, the book responds: what we owe should be conceived less in terms of criticism than in terms of listening.
Hall’s intellectual life was animated by voice in literal and extended senses: not only was his voice distinctive in the materiality of its sound, but his thinking and writing were fundamentally shaped by a dialogical and reciprocal practice of speaking and listening. Voice, Scott suggests, is the central axis of the ethos of Hall’s style.
Against the backdrop of the consideration of the voice’s aspects, Scott specifically engages Hall’s relationship to the concepts of "contingency" and "identity," concepts that were dimensions less of a method as such than of an attuned and responsive attitude to the world. This attitude, moreover, constituted an ethical orientation of Hall’s that should be thought of as a special kind of generosity, namely a "receptive generosity," a generosity oriented as much around giving as receiving, as much around listening as speaking.
AUTHOR BIOGRAPHY
David Scott is Professor of Anthropology at Columbia University. He is the author of a number of books, including Omens of Adversity: Tragedy, Time, Memory, Justice and Conscripts of Modernity: The Tragedy of Colonial Enlightenment, and is the editor of Small Axe: A Caribbean Journal of Criticism, all also published by Duke University Press.
REVIEWS
-- Sindre Bangstad Africa is a Country


Apology: On Intellectual Friendship  1
1. A Listening Self: Voice and the Ethos of Style  23
2. Responsiveness to the Present: Thinking through Contingency  53
3. Attunement to Identity: What We Make of What We Find  85
4. Learning to Learn from Others: An Ethics of Receptive Generosity  115
Adieu: Walk Good  143
Acknowledgments  147
Notes  149
Index  179