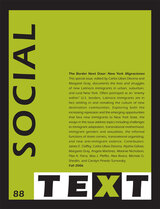 BUY
The Border Next Door: New York Migraciones, Volume 24
by Carlos Ulises Decena and Margaret Gray
Duke University Press
Paper: 978-0-8223-6661-4
Addressing how national immigration concerns play out at urban, rural, and suburban levels in the state of New York, this special issue of Social Text offers new insight into an area of study that has long been focused primarily on cities. As new Latino/a immigrants change the culture and social fabric of small communities and reshape policy concerns, suburban and rural regions are becoming key locations for anti-immigrant acts and immigrant social justice organizing. This special issue presents immigrant stories and community and advocacy responses that underscore the need to recognize the diversity of Latino/a immigrant experiences, and it explores the widely varying responses of towns, counties, and both new and established immigrant groups to the race, ethnic, and class tensions usually associated with cities.

While focusing on Central American and Mexican immigrants in New York state, the contributors to this issue—scholars, activists, artists, and filmmakers—situate their work within a national context and consider the paradox of the experience of Latino/a immigrants, who face increasing repression on the one hand and emerging opportunities on the other. Essays address the experience of transnational mothers who leave their children in the care of extended family to pursue low-wage U.S. jobs; the politics of gender and sexuality in immigrant communities; the social practices of day laborers as they wait for work on street corners; and the unlikely pairing of the Virgen de Guadalupe and New York State attorney general Eliot Spitzer as figures to whom Mexican immigrants appeal in their demands for rights and dignity. Other articles address the upsurge of immigrant mobility, anti-immigrant activities, and immigrant advocacy in non-urban locations.