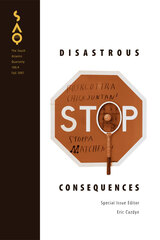 BUY
Disastrous Consequences, Volume 106
by Eric Cazdyn
Duke University Press
Paper: 978-0-8223-6700-0
The past few years have seen numerous natural disasters, from the 2004 tsunami in Southeast Asia to the devastation of Hurricane Katrina. Many believe that these disasters will only increase as global warming intensifies. This special issue of SAQ examines the political and social problems that underlie and exacerbate the effects of disasters, be they natural or man-made.

From the fields of anthropology, architecture, cultural studies, economics, epidemiology, journalism, and philosophy, the contributors argue that disasters do not only follow from things going horribly wrong (extreme weather, economic collapse, urban decay). Often they are the predictable results of things going according to plan. The meaning of disaster itself is challenged, theorized again, and reconceptualized.

One essay argues that media reports during Hurricane Katrina worked to deny or disguise institutionalized racism, suppressing potential dissent and controversy. Another examines how the state bureaucracy reinforces cycles of death, disease, and poverty in South Africa. A third explores the devastating conditions of everyday life in Detroit that no longer register in the political imaginary of the United States. Still another investigates the connection between unusual weather events and the workings of the Communist Party in Poland. Finally, the renowned architect Isozaki Arata plays with the idea of urban planning in two short fables introduced by Fredric Jameson.