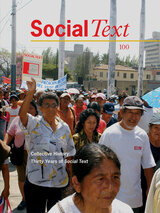 BUY
Collective History: Thirty Years of Social Text, Volume 27
by Brent Hayes Edwards and Anna McCarthy
Duke University Press
Paper: 978-0-8223-6724-6
This issue marks the thirtieth anniversary of Social Text and celebrates the journal’s legacy. Offering a history of the journal since its inception in 1979, this issue explores the elements that have made Social Text what it is today: the intellectual impulses that first brought the editorial collective of scholars, artists, and activists together; the collective’s special commitment to collaborative journal editing; and the unique path the journal has taken to arrive at the distinctive place it now occupies in new left critical thought.

Featuring new interviews with Social Text’s founders and former editors—including Stanley Aronowitz, John Brenkman, Fredric Jameson, Randy Martin, Toby Miller, Bruce Robbins, Andrew Ross, Sohnya Sayres, and Anders Stephanson—the issue reflects on the journal’s legacy as a radical publication that has bridged politics and the academy and has made critical interventions in both arenas. Several contributors revisit the first issue of the journal and describe its lasting impact. Others examine the politics of production at Social Text and detail the hands-on process of putting the journal together. Notably, the issue also features thirty essays by members of the current editorial collective, on key topics that have been crucial to the journal. Ranging from aesthetics to war, and including empire, mass culture, revolution, science, and theory, these essays bring to life the cultural history of the journal and demonstrate how Social Text has shaped the way that these terms are conceptualized and used today.

Contributors. The forty-four contributors include the current members of the Social Text collective and a number of former members. For a complete list of the collective, visit socialtextonline.org.